One of the mains goals of EBANX performance team is to have a deeper understanding and greater knowledge of the Latin American online market. So, we have mapped the entire buying journey of a customer, analyzing the cost of advertising in Latin Americans’ favorite channels in order to reach one of the most important metrics to measure a business’ success, the Customer Acquisition Cost (CAC).

We introduced our results exclusively at the EBANX Summit 18′, an event that gathered some of the greatest companies in the world to discuss the complexity of the Latin American market.

Without further ado, let’s get to the point!

Before anything, just to give you some context, here is the methodology we used: firstly, we’ve chosen the buying funnel stages (that you can see in the image below), validated the most accessed channels and simulated several online campaigns.

Through the analysis of two important metrics (Cost per Click and Orders over Visit rates) we came to the conclusion that it is cheaper to advertise online in Latin America, hence the Customer Acquisition Cost is lower. 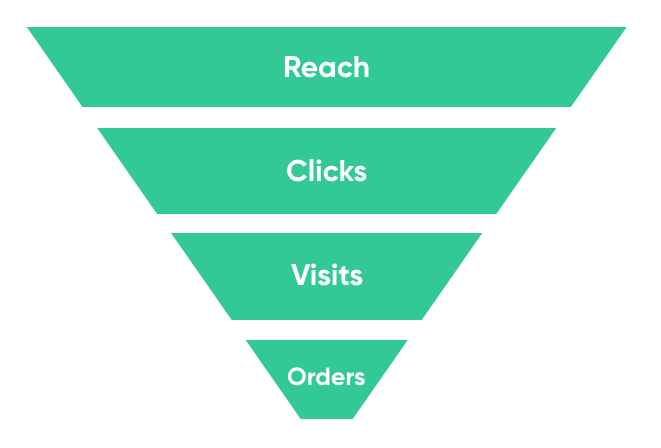 Using data from SimilarWeb we validated which were the most used social media, video platforms and search engines in Latin American countries; Facebook, Instagram, Youtube and Google were among the most popular channels.

Based on the most used channels, we simulated several online campaigns on Facebook and Google, using different ad formats and segmentation, with a total investment of USD 100,000.

Now, let’s break down the results.

The first metric we’ll look into is the reach obtained in each one of the markets using the USD 100,000 budget. Here, we’ve considered two forms of reach: one consisted of the total amount of impacted users and the other one a qualified audience.

Paid Buyers: the total amount of impacted users that are considering buying a product from a given industry

Let’s take the fashion industry as an example. As we analyze the numbers, we can notice that we could reach 54% more people in Latin America in comparison to Europe, and 418% more in comparison to the US and Canada, all within the above budget.

Beyond this metric, if we look at the proportion of the number Paid Buyers in relation to the total amount of Paid Reach, we can notice a much larger percentage in the US+Canada (90%) and in Europe (66%).

But why does this happen?

Mostly because the US, Canada, and Europe are developed countries where online shopping is already consolidated; yet, there is also a market saturation that diminishes the possibility of expanding a campaign to a greater audience. In emerging countries like Latin America’s, the population still has a high buying potential, thus it ends up being cheaper to reach a larger amount of people in these regions, no mention the enormous room for growth.

After verifying the reach, let’s descend to the next funnel stage: clicks. We calculated this metric on the basis of the average CPC in each market and industry.

Calculating the average CPC of all industries we have Latin America with $0.14, Europe with $0.36 and US+Canada with $0.99. By doing a simple calculation, we get that the lower the CPC, higher the volume of clicks that you will receive in your campaign.

Once more, Latin America leads the way with the lowest CPC, as we can see in the simulation below:

With the first part of the funnel complete, let’s move to the Orders over Visits Rate that allows us to check out the volume of orders that was obtained using the initial investment of USD 100,000.

It’s important to note that the Orders over Visits Rate is basically a conversion rate — the total amount of orders taken divided by the total number of visits to the website in the given period –, but for this study, in particular, we used a specific nomenclature.

In order to find out this rate, we’ve looked into general numbers considering only the retail market using Statista and Ecommerce Europe. Especially for Latin America, we used exclusive internal data from EBANX that comprehends retailers from Brazil, Mexico, Argentina, Chile, Colombia, and Peru. 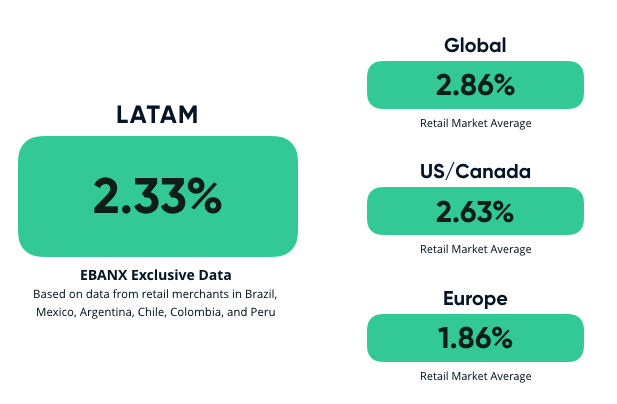 We went through all the buying funnel stages (Reach, Clicks, Visits, and Orders), so with all this data in hand, we can finally calculate the Customer Acquisition Cost (CAC). It’s worth pointing out that this cost is only considering the paid media investment.

Understanding the data presented in the tables

As shown in the table, the CAC is much lower in Latin America, proving that is cheaper to advertise and get more customers for a lower price.

Digging a little deeper, we understand that the average ticket price of each company is different and this has a direct impact in the Orders Over Visits rate. According to EBANX internal data, you can check out below the same calculus divided by the Average Ticket Prices:

By analyzing the consumer behavior, we notice that the Orders Over Visits rate is greater when the average ticket price is smaller, which leads to a lower CAC in comparison to higher average tickets.

All these data were obtained through analysis of our own. In order to be more assertive, you can use your store’s own Orders Over Visits and Approved Payments rates and figure out your Customer Acquisition cost with the help of our table, available for download below:

Figure out your Customer Acquisition Cost

Latin America has a great business potential with more than 420 million consumers waiting to buy from you. After months studying the customer journey, here are three important findings that might change your opinion on LatAm: