It’s not the TV shows, soap operas, or soccer that are currently monopolizing the daily conversations of Brazilians. As the year of 2018 ends, all eyes are on two very specific topics: Politics and Economy.

This change in Brazilian society’s behavior is due to the fact that Brazil is going through one of the most polarized electoral periods of its democratic history. On one hand, the representative of the Workers’ Party (Partido dos Trabalhadores, PT), Fernando Haddad, fights so that the legacy of PT does not end (the party controlled the country for 14 years). On the other hand, the candidate of the Social Liberal Party (Partido Social Liberal, PSL), Jair Bolsonaro, stands out for his extreme right-wing political views and for leading the electoral polls in the country since August. Since each one of them represent completely opposite country projects, the dispute between the two candidates stressed the population’s, analysts’ and, of course, the market’s moods.

In addition to the controversies in the political field, the 2018’s election period in Brazil coincided with the US dollar appreciation in emerging economies, such as in Turkey and Argentina. On September 13th, the US dollar reached its highest exchange rate compared to the Brazilian real since 2016: 1 US dollar was equal to 4.19 Brazilian reals. After the 2018 elections’ second round was defined, the US dollar depreciated, being equal to 3 Brazilian reals, but there are still many doubts around this topic.

“Will the US dollar in Brazil stabilize after the elections?”, “If electoral polls are confirmed and Bolsonaro gets elected, will the US dollar valuation continue to decline or will it rise again?”.

In order to answer these and other questions, we spoke with the economist and professor at the Federal University of Paraná (UFPR), Fabiano Abranches Silva Dalto, a specialist in monetary and financial economics. We also conducted a historical analysis of US dollar’s variation during the last electoral periods in Brazil.

The Brazilian electoral period of 2018 has been often compared to the 2002’s. Back then, the presidential elections in the country took place in a time of both global and domestic crisis. The imminent war between the United States and Iraq is an example of the global crisis, whereas the highest peak of county risk registered in Brazilian history, the tension in the international market about it, and the lack of liquidity helped shape a domestic crisis, characterizing the “Lula Effect” in the economy – a reference to the candidate who won the elections, Luiz Inácio Lula da Silva.

The fear was not unfounded: back then, Lula personified the change in the economic positioning adopted by the previous government.

The concern was related to the possibility of a moratorium – as had happened in Argentina in 2001 – because of the growing Brazilian external debt. But it’s precisely here where lies one of the key points that differentiate the current situation and that one. In 2002, most of the Brazilian debt was carried by international creditors. Such fact put Brazil in a vulnerable position in relation to US dollar variations. In other words, the more the US dollar increased, the more US dollars flowed out of the country and the more the foreign debt was raised, compromising a huge chunk of the public budget. 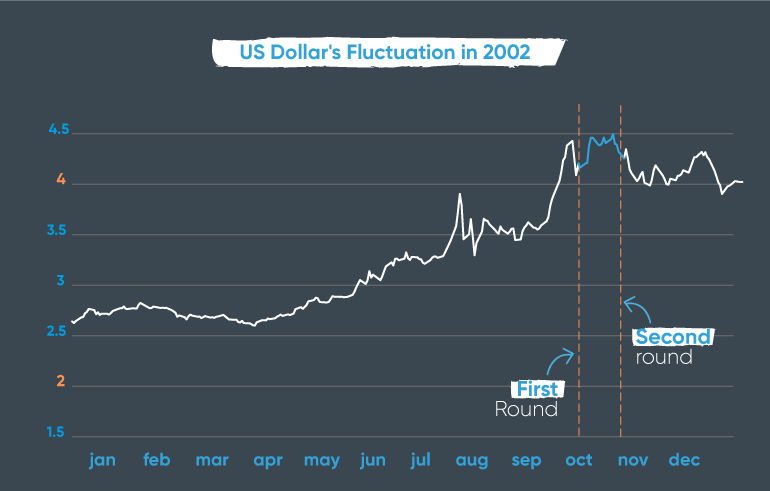 As in 2018, the electoral period of 2002 happened amid a climate of economic uncertainty and Lula appeared as a surprise element that was only completely figured out once he took over as the President of the Republic. Before that, the actual positioning of the candidate was a mystery to the experts and a reason for speculation. This feeling is very similar to what we are experiencing today regarding the potential directions of government in the coming years.

Despite the similarities, putting the situation of 2018′ Brazil as the same as 2002’s Brazil may be a misinterpretation. Economist Fabiano Dalto points out that “Brazil’s current economic situation is completely different from what it was in 2002. In 2002 and 2003, we were without exchange reserves, we were heavily indebted in dollars and we had a very high public external debt. This means that we were paying our bills in foreign currency and were very dependent of external financing. (…) In this respect, [2018] is much different. We do not depend so much on foreign financing for the economy to grow“, he said in his interview for LABS.

When comparing the two periods, Dalto points out that Brazil is now in a more positive position than it was at that time, and that the challenges now are completely different. “We had a balance of payments problem in 2002, we did not have our own funds to pay off the debt. Today we are in an opposite situation: we have surplus funds for the debts. So, when they arrive, we will be able to pay them and still have money. It’s a crucial difference. Yes, we are facing a domestic crisis (…) but, from the balance of payments’ point of view, the comparison between 2002 and 2018 is not fair”, said the economist.

During the following presidential elections, the market’s expectations were different. Still, according to Dalto, “every election generates uncertainties” and they generate a direct impact on exchange rate volatility. As a result of this, instability in the US dollar rate in Brazil has been observed in other election periods, but it does not always present itself in the same way.

Other factors have an influence on this, but, as EBANX economists already declared in this post (in Portuguese), reinforcing Dalto’s position, everything points that this fluctuation is just a transient thing, finding balance as soon as the new President takes over.

[The electoral time] is the moment to guess what’s going to be in the future, as the conditions will determine the prices in the future. When you see that it was just speculation, prices go back to normal and the agents start to realize that the future will be more similar to the present, without any major changes.

Exchange rates in Brazil and the world

Who keeps track of the international market probably has already linked something from this text to the situation of Argentina. Brazil’s neighbor, the country has a delicate relationship with the American currency, which led to a never-seen-before devaluation of the currency in the country this year. Nevertheless, Dalto reveals a more optimist vision for Brazil in comparison to the Argentinian landscape.

According to him, in Brazil, the stock of international reserves guarantees relative tranquility in regard to exchange rate changes — the dollar reserve of the country reached USD 381,7 in this September. Add that to the position of the country in the international market, today a creditor nation.

“We are more protected from international variations than Argentina. And these are the factors that are protecting us right now. The situation could be much worse, we could be asking the IMF for help”, he adds.

Fabiano Dalto reinforces positive aspects of the current situation in Brazil in comparison to stronger markets that are not emerging potencies, but well-established countries in the global economy, such as Australia. “No one will call Australia an emerging country. Yet their exchange rate volatility is bigger than ours”, explains. In the last few years, Australia demonstrated a fluctuation in relation to the American dollar very similar to the one that was lived in Brazil

In other words, even if volatile, the exchange rate model adopted in Brazil is not exclusive of the emerging countries and, therefore, shouldn’t be considered immature. Besides that, it is a model that doesn’t lead the countries to a serious economic crisis, which is what happens in Argentina.

What is the landscape, after all?

In relation to the dollar, the landscape is more stable. A proof of this stability is the current process of recovery of the valuation of Real, which is already being felt in Brazil. Political questions left aside, Brazil has already recovered from much more serious situations in the past, such as what happened in 2002. Today, the nation is stronger and in a safer place than before.

To the market, both internal and external, the new president must be someone that, beyond the deficit reduction, has the political and strategic conditions to make that come true. The bet is, thus, in the payment of the debt and the resumption of the nation’s growth through control of spending, approval of reforms and stabilization of the political scenario.

The exchange rate fluctuation during the electoral period is something expected due to the exchange rate model adopted in Brazil. But economy experts agree that it is fleeting and the election definitions that take place this weekend should bring a new moment of equilibrium to the market.